It’s been a week since my subscription to WoW lapsed, and while I miss it, I’m trying to do a bit better and not let it impact me too much. To try to combat this, I’ve been playing a lot more LotRO lately, and I’m finally coming to the end of Volume One of the epic quests. I know I don’t need to do them, but I feel like I should completely finish with the Angmar plotline before I even think about looking at Moria, although I am excited to finally see it.

So Anthyllis has finally hit level 50, making her the highest-level character I’ve ever had in LotRO, and she even completed Books 1 – 8. Apparently, once you do that, you get a new title! 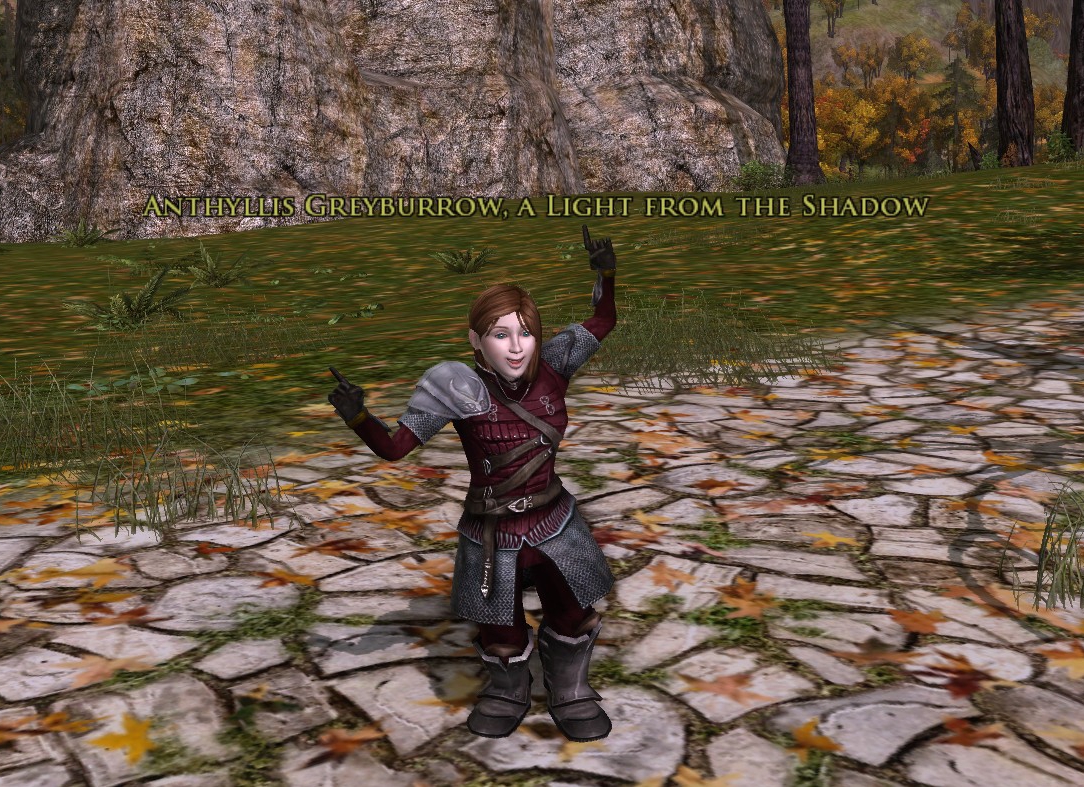 I had no idea this was actually a title I was capable of earning, so when I discovered it, I was beyond excited and immediately switched Anthyllis’ title from “Song Warrior” to “A Light from the Shadow”. I’m proud of my accomplishment.

In other exciting LotRO news, I’m finally going to be able to attend Weatherstock this year! Now, for those of you who don’t know, Weatherstock is an annual in-game concert series on the Landroval server hosted by the Lonely Mountain Band kinship (who are really awesome people). Bands from various other servers come to compete, and it’s generally a good time all around. This year, it takes place next week (July 20th, to be exact) from 1pm to 5pm (EST) on top of Weathertop (hence Weatherstock). There’s even an escort for the characters that are too low-level to safely make it to the top on their own. So if you’re elsewhere and want to check it out, roll a little character on Landroval, get them through their various starting quests, and make the trek to Bree to get prepared.

I’m excited, because in the two (almost three) years that I’ve been playing, I’ve never actually been able to attend. In previous years, I was only able to listen via various livestreams, but I want to be able to see it in person. Expect pictures, guys.

Today was going to be a different post. However, today Blizzard unleashed the Mists of Pandaria cinematic and I was so thrilled by it that I had to share it with all of you. It would have been nice, at least, to see the monk be a female pandaren, but I still enjoyed it.

Other people have said that the cinematic is missing the epicness from previous cinematics, and while that’s technically true, it fits into what seems to be the general theme of Mists of Pandaria. For once, there’s no major villain we have to worry about here (that I know of, anyway, though I will maim people if Blizzard throws one in at the last minute). It’s just the game getting back to it’s roots, with the Alliance and the Horde fighting each other, and something new getting a starring role (in this case the pandaren). The cinematic itself also emphasizes the pandaren and their initial neutrality by having the monk fight both the Alliance and the Horde, which, I have to admit, is pretty cool to see.

It might not be as epic as seeing Deathwing break through Azeroth, or watching Arthas raise an undead army, or even seeing what we could be depending on the classes we choose. However, I really don’t think the cinematic needs to be. It is what it is, no more, no less. That in and of itself seems to be what the pandaren are all about. They aren’t flashy. They are practical, in my experience, and this cinematic captures that from the minute the pandaren enters the picture.

Also, would you just look at the backgrounds in this one? They’re gorgeous!

So, since Pen and Shield covers multiple games now, I decided to personally take things a step further. Not only are we going into my Warcraft screenshots folder, but also my SWTOR and LotRO screenshot folders. I guess I like madness? I don’t know. END_OF_DOCUMENT_TOKEN_TO_BE_REPLACED

Ages and ages ago, when your beloved author first began gaming, I was very clueless about role types when it came to games. Certainly, I knew that you had your warriors and your casters and people who could heal you, but I knew them by class name, not types. It wasn’t until years later, when I picked up World of Warcraft, joined my very first guild, and began raiding that I learned that class types even really existed. Before then, my only real experience in group combat had been in the form of Dungeons and Dragons, where I preferred to be a sorcerer, standing in the back and quietly shooting at things. This idea of class roles was completely foreign to me.

It didn’t take me very long to fall in love with the paladin class, though. I could hit hard, take damage, and heal myself if I needed to. Because I was so in love with the idea of the armored warrior with a sword and shield, I thought to myself that I’d be a tank (this was after I learned what class roles were, mind). How hard could it really be? So I dove in and it was awesome. Well, for a little while. Unfortunately, I realized being a tank was incredibly intimidating and definitely not for me. Besides which, my guild at the time needed healers, and paladins could spec into a tree that let them heal. It seemed like a good plan, so I switched to a holy spec and never looked back. Eventually, a server switch happened and, when it did, I tried all sorts of other classes. The next class I ever did any sort of raiding with was a rogue (Jinaki before I went and rerolled the poor girl multiple times). However, I soon learned this was also a bad plan. Because the computers I played on were less than optimal, any time I got close enough to a mob where multiple spell effects went off at any given time, lag happened. Sadly, I also couldn’t turn them off because, if I did, I’d be heavily SOL and die more often than any DPS class really should. The lag was so bad that I couldn’t do anything, and that effectively put an end to my melee career.

Since then, I went back to my roots, and stuck with my caster/ranged DPS classes. I love them. I did heal occasionally, but to be honest, no other healing class holds my love like paladin healing does. And yet, when SWTOR came out, I jumped at the chance to be a commando, solely because I could heal. The fact that I can heal at all has saved my butt more than once, I can tell you that. However, the trooper was one of those classes I honestly didn’t think I’d play come launch of the game, and, keeping that in mind and also taking into account that our guild Imperial-side needed healers, I decided I was going to try an Imperial Operative.

You would think it would, because it had pretty much everything I loved about my commando when I first got her. I could heal if things got too bad. I could still attack things, still hide behind cover if I needed to. The problem was that the majority of my abilities required me to be in melee range. This meant I was mostly running up to things and shooting them in the face. You might say I should have stuck it out longer, but after twelve levels of running around and falling in love with cover and then suddenly not really having it as an option and gimping myself unless I refused to use it was just not for me. I couldn’t do it. It makes me sad, because I’ve seen some pretty badass Operatives. I know they can be bamfs. They’re just… not for me.

As a result, I started to think about why that was, and I thought back to Jinaki. I didn’t hate her as a character; I love her to bits. I (sort of) knew what I was doing. I mean, I didn’t top DPS charts or anything, but I like to think I wasn’t being carried. Taking the lag out of the equation (and, in fact, it’s a moot point since I got my new computer), why was I out of love with melee? And then I realized what it was.

I found it boring. I liked being able to pick things off from a distance or sending something else in to take care of it for me while I sat back and slowly picked things off at my own pace. It’s a game for me. How best to survive the encounter? What combination of abilities can I use to pick things off at my own pace? What can I do to ensure I live and they don’t? How much of their health can I take away before they get anywhere near me?

Healing is a bit like that for me, as well, where I can stand back, look at my healing spells, and say, “All right. What can I cast when to make sure my tank/DPS/whatever lives so the enemy can die?” Melee combat, however… where’s the challenge in it? Melee, you rush in head first, and, most of the time, you’re lucky to be alive by the time the thing you’re fighting dies. To me, that isn’t fun. That’s suicide. I can see where other people would find it fun, but, for me, not so much. So, if you want to rush right in, you go right ahead, my dear. I’ll just be back here, shooting at things or keeping you alive.