There are spoilers for Chapter One of the trooper class storyline beneath the cut here. You have been warned.

END_OF_DOCUMENT_TOKEN_TO_BE_REPLACED

As I’ve mentioned several times over Twitter, I consider myself to be incredibly fortunate to have gotten in to test Star Wars: The Old Republic not just once, but twice. It has opened my eyes to a wonderful galaxy of things that I never thought possible. The way each quest is presented to you is quite unique, and the things you choose can affect your character one way or the other. Do you allow the person who tried to kill an Imperial to live and serve the Empire or do you kill that person for the attempt right then and there? Upon seeing a woman getting smacked around considerably, do you step in to defend her or allow this to continue? The fact that we have these choices is something unique to The Old Republic, something I love, and seeing it all come together, even in a beta format, is nothing short of incredible.

Quite possibly the best thing about the beta, however, was that it allowed me to test the various classes that I had been waffling between for ages. I did let myself test the Jedi Consular, and I discovered very quickly that it felt like I was coming home after a long time away from it. After coming to that realization, I had to stop playing for fear of spoiling the story for myself and I knew I had to come back to this class after launch. Unfortunately, I didn’t have the same resolve with the Sith Inquisitor, taking the character (not once, but twice) through their trials on Korriban and winding up with my first companion character. I’m planning on taking her a bit further simply so I can explore the talent trees in a bit more depth (and so I can figure out whether or not my Consular will be wielding a dual-bladed saber or a single one).

However, on the last few days of my first weekend in beta, I decided to do something different. I decided to try out a class I had no desire to play come launch, just to see what the story was like. High on my list of classes I was so certain I wasn’t going to touch was the Trooper. In the past, the trooper had been presented to me as a heavily armored tank, the exact sort of thing I swore to myself I was never going to be. I tried that back in World of Warcraft and I sadly came to the realization that tanking was too high-stress for me. Back then, it was the very last thing I needed in my life. However, after exploring the trooper a bit more, I came to the startling realization that if I chose the Commando Advanced Class option, I could heal. Healing I could do! And, from the sound of the things I had heard at the time, it seemed like they would be similar to paladin healing in World of Warcraft. I could do that! Paladin healing had always been my favorite kind of healing!

Armed with this knowledge, but still very certain I was going to hate the trooper in spite of this, I logged into the beta that first beta weekend and rolled myself a trooper based on one of my oldest characters: a paladin from the Warcraft universe named Damaris Vordane (called Vordane in-game). Once I finally adjusted her looks to SWTOR standards, I logged in, the opening crawl rolled, and I was ready. Vordane’s story, same as the story of every trooper in the game, began on Ord Mantell, where the Republic was fighting valiantly against separatist forces. Even as I made my way through the first few minutes of the opening movie, I knew something was something off about the separatists, namely that they seemed to have weaponry and knowledge they definitely weren’t supposed to. By the time the opening movie was over and Vordane was ready to set foot into the world armed with little more than a gun and the clothes on her back. She knew with absolute certainty the separatists had to be stopped before they destroyed everything she loved with a cannon they had stolen from us.

At the time, I had just finished playing a few levels of a smuggler, and I found myself missing having the cover system to hide behind at first. However, the more I played my trooper, the more I realized I wasn’t missing it at all. I had a giant rifle, after all. Four or more average level mobs? No problem with a big-ass gun! A stronger mob and an average one? Also not really a problem once you got the rhythm down. I had an amazing gun, and I was going to use it.

As the story continued to unfold during this most recent beta weekend, so did Vordane: a soldier dedicated to the Republic and doing what was right. She didn’t need the Force or any other fancy gimmicks. She was a soldier. She didn’t need to be anything else. What she had was her conviction and her faith that they would be capable of doing the right thing in the end, and, you know, a big-ass gun. I suspected things were getting bad for me when I discovered I had gotten a gun that I fell in love with before I had gotten the chance to take it anywhere (I dubbed it Bertha), but I pushed it aside, engrossed in the story. By the time I was done with Ord Mantell, I was confronted with several plot elements I had never anticipated, and it was in that moment, faced with that surprising plot twist, that I said something I honestly never expected to. 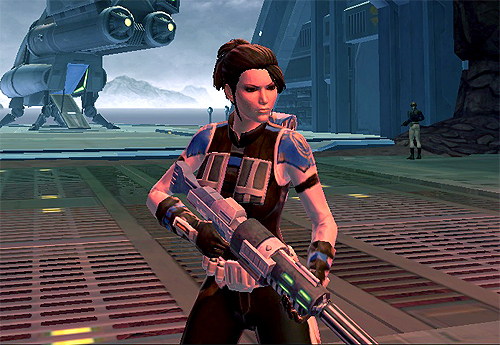 Vordane the trooper around level 9 or so, about ready to leave Ord Mantell.

That’s right. The one class I told myself I would never like or love was the one I had fallen completely head over heels for. It was the perfect class. I got to stand at a distance and shoot at things, but I was well-armored enough for it to almost not matter if I got hit. I was a freaking wrecking ball with a gun, and I didn’t care what got in my way.

Even now, as a commando that has gotten hold of a cannon (this thing is the best thing ever, I swear) and her own starship, I still love it. I’m still trying to make sense of the abilities I’ve got, but I know I’ll be back. I’ll probably have an all-new character ready to go by then, as Damaris’ proper story lies outside of SWTOR, but I’m definitely having a trooper in my alt arsenal.