Well, I did it! I finally got to live the dream and attend Weatherstock! I wasn’t able to be there for all of it, unfortunately, as apparently my internet connection couldn’t handle it, but, truthfully, I wouldn’t have been able to have been there for all of it, anyway, as it ran a lot longer than it was supposed to and I had only really allocated enough time for the original runtime. I need to remember to plan for that for next year.

For those of you who missed my previous post about it, this year was the fifth year of Weatherstock. It’s a ridiculously large concert on the Landroval server of LotRO that takes place on top of Weathertop. (Where else?) Various in-game bands come together to perform and compete for various prizes, and it’s all organized by the amazing Lonely Mountain Band kinship (who actually has several bands under their banner, none of which are eligible for the prizes). It was a lot of a fun and hopefully I’ll be able to make it for next year.

Of course, I had to find Anthyllis’ prettiest dress in her wardrobe first. If she was going out to a concert, she had to look nice, after all. 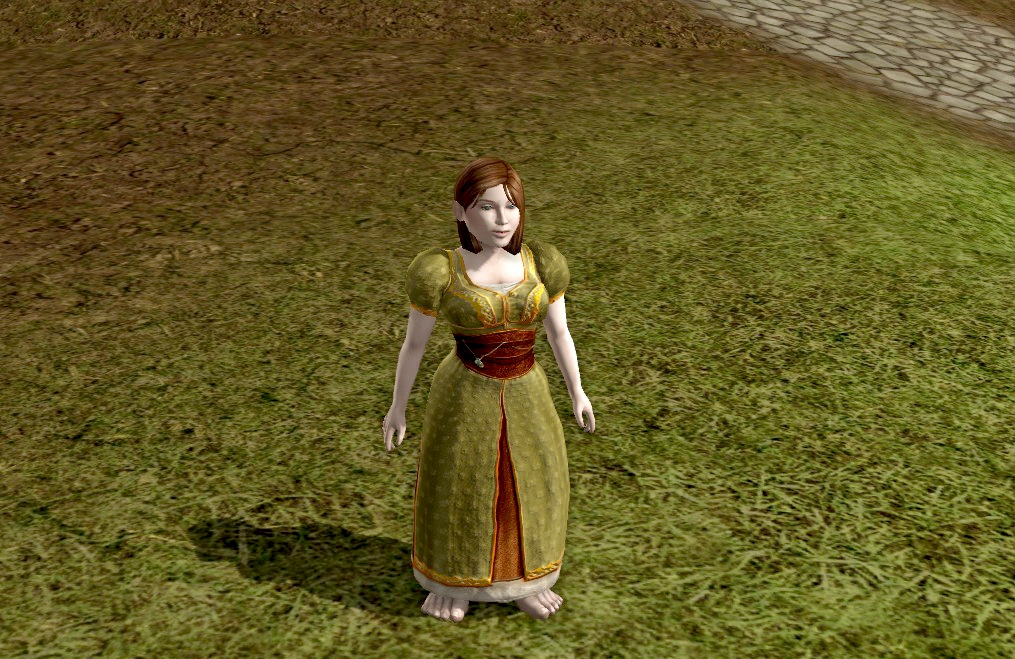 All dressed up and ready to go!

Well, okay, maybe it’s not her prettiest dress, but it’s certainly her favorite.

By the time I managed to log in and get all prettied up, folks were gathering at the Forsaken Inn out in the Lone-lands, so naturally, that had to be my first stop. Well, after I lowered all my graphics settings so nothing would potentially get fried.

If you do decide to attend Weatherstock in the future, that’s the one piece of advice everyone gives you that I will heartily recommend for everyone. Make sure your graphics settings are set as low as humanly possible. Once everyone’s up at the concert area and the initial lag has been combated, then (and only then) should you try to bring your graphics settings back up. Not every graphics card can handle it, and this is definitely not the time to test the limits of your computer.

Trust me on this, guys. This really isn’t the best time to try to test your computer’s limits. Bad things may potentially happen if you do that during this.

Anyway, folks weren’t kidding when they mentioned the epic lag that comes hand in hand with this event. The closer I got to the inn, the more lag I was hit with, and it was all due to the pre-show concert up there. By the time I got there, a sizable crowd of people had already gathered, and it turned out more were on the way. The closer we got to the beginning of the concert proper, the more people there were. 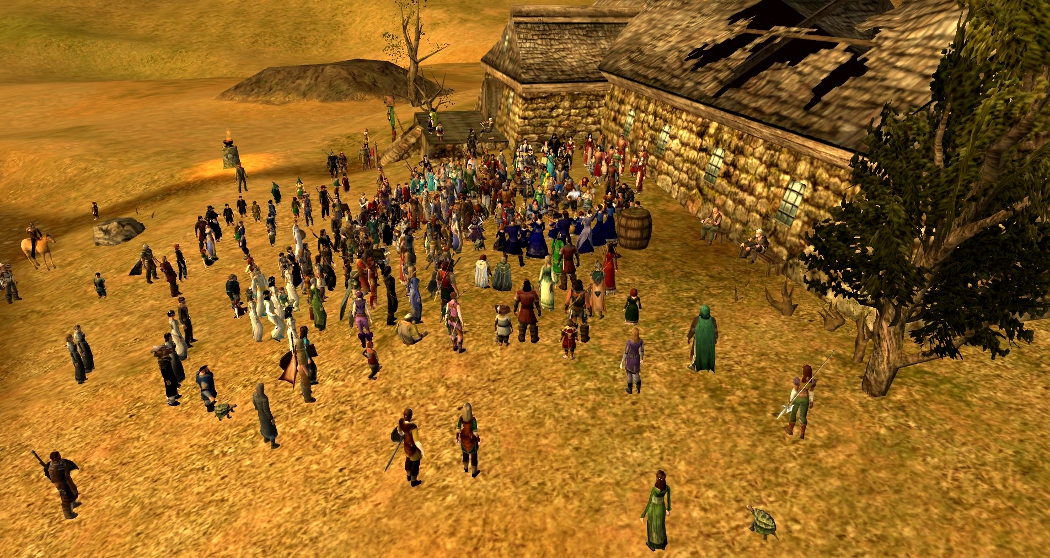 And that’s not even everyone, either. There were already folks up on the mountain at this point.

The crowd just kept getting bigger!

Eventually, night fell in-game and it was finally time for all of us to begin the mounted procession up towards Weathertop. This was where the epic lagfest definitely kicked in. Take at least a hundred people on mounts all heading in the same direction, and, really, you can only be hit with lag. Fortunately, Harperella, our procession leader and announcer for most of the event, had a wonderful suggestion for us: put the rider in front of you on follow. Turned out that’s what I had to do in order to move anywhere.

I’ve always thought my computer was fairly decent when it came to certain things. It isn’t exactly a top of the line gaming system, no, but I always thought it handled lag pretty well.

That was up until the mounted procession. 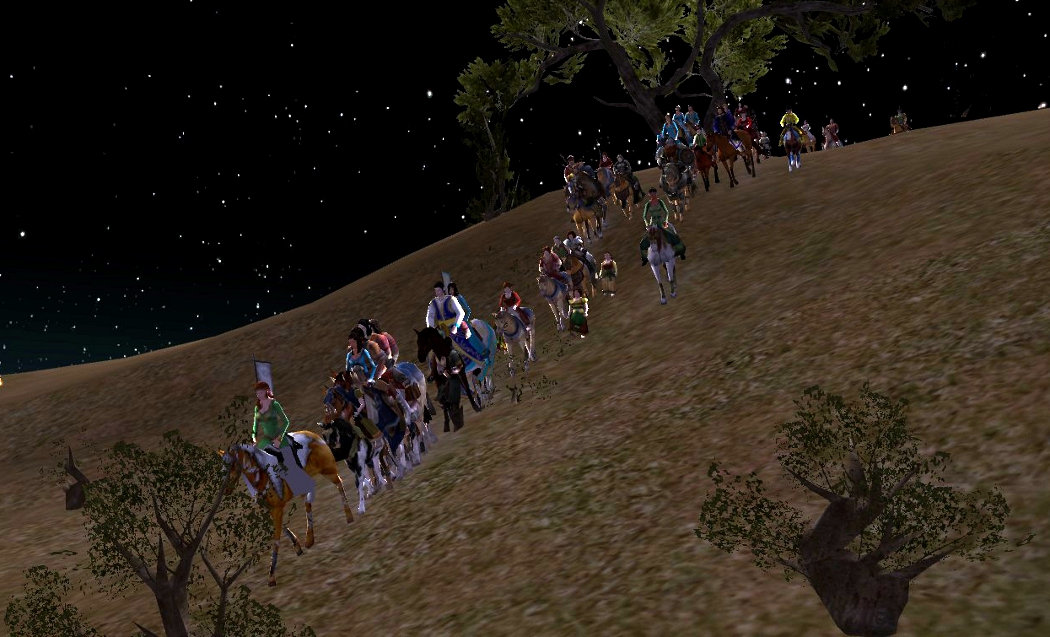 The mounted procession up to Weatherstock! You can even see Harperella in the front there. She’s in the green.

We all started joking about reduced awareness hitting us all at that point in time, and believe me, it hit all of us. That was seriously the best shot of the procession I could actually get. There were a lot more of us behind the main herd. The only problem is that we just couldn’t see them.

Reduced awareness will do that, sadly.

We finally managed to make it to Weathertop mountain where I slowly discovered following certain people when lag was involved was not the best of plans as the lag caused me to loop a bit and I wound up falling over the edge of the path leading up to the mountain and losing the main pack. I didn’t die, fortunately, as I didn’t fall too far. However, as I understand it, there are a few who might in the climb up. Fortunately, the LMB crew was prepared for that and they offered resurrections to those who might have plummeted to their deaths while trying to follow the pack. They even informed us of the areas where the lag would hit us the worst. Eventually, however, we made it to the top, where there were even more people waiting for us. 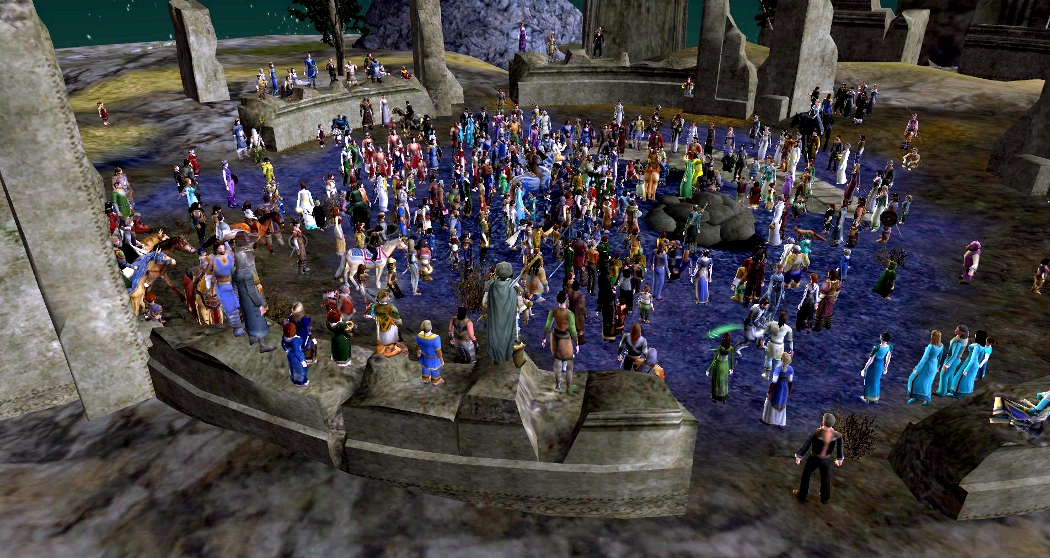 Look at all these people!

Before I continue, can I just say that I really commend the Lonely Mountain Band kinship for all of this? They had all of this all planned out. They had people offering escorts for lower-level characters to get to the top of Weathertop. They had people willing to ‘port people over if they were running late. They had a crew organized to keep all of us safe from the vicious crebain that surrounded the mountain. They even had vendors going so our characters had food, drinks, and even pipeweed for the event.

The last I knew, there were over 500 players in attendance, and some of them weren’t even from Landroval. Folks from other servers will roll lower-level characters specifically to come to this event. We even have performers from other servers!

All in all, for the almost four hours that I was there, I had a lot of a fun. I got to listen to some awesome in-game music, some of which was actually composed by the bands themselves (so major props to them) and others that were just a whole lot of parodies or lyrically adjusted to fit the setting (“I can’t get no~ catfish action~”). I had a ridiculous amount of fun at this, and I’m definitely hoping I’m going to be able to attend for all of Weatherstock next year. 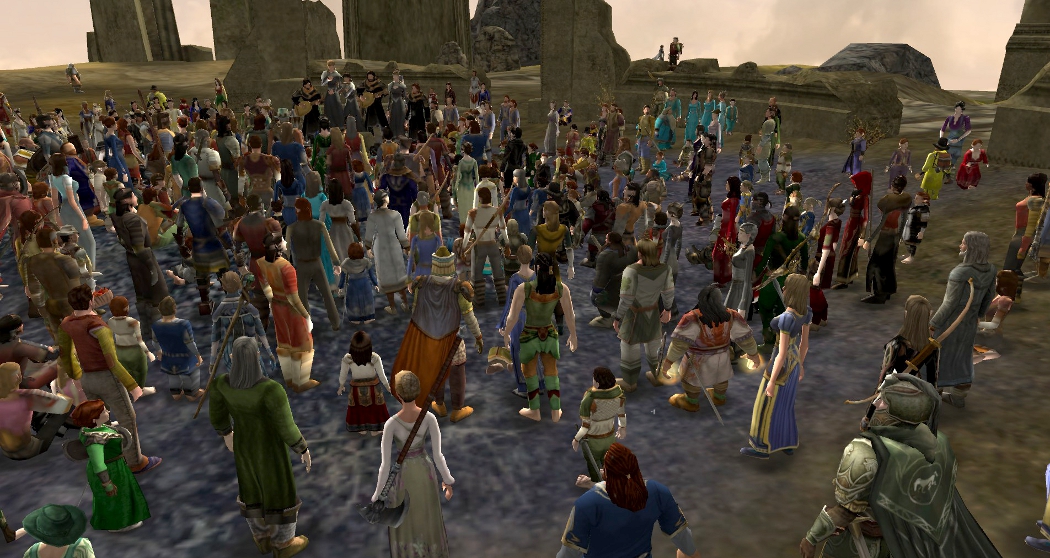 The Shades performing to a crazily-sized crowd!

Seriously, if you have the opportunity to go or to attend one of the miniature concerts leading up to the event next year, go. You will definitely not be disappointed.