I’ll be the first to admit that I’ve been a bit strapped for ideas lately, so, today, I decided to let one of mine do the talking. Everybody, meet Kadsura (she prefers Kadi, thanks) Steamgear, goblin shaman, today talking about, well, being a goblin and a shaman. 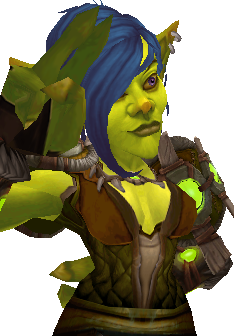 You know, lately, I’ve been getting tired of the same old thing. No, really, I mean it. Kezan was okay, I guess, and the Lost Isles were— Well, let’s just say that “interesting” is too nice of a word for them. I mean, there were plants. Lots of plants. If you’re into that sort of thing. And things that wanted to eat us. And, you know, Gallywix being kind of a jackass, but when isn’t he?

Did I mention the asshole wanted us to be mindless idiots working in his damn mines? Yeah, I don’t think so. I’m way too good for that.

So, right. I decide to try something new! Awesome! But then people say to me, “Kadi!”

I say, “What?!” Because nine times out of ten, they’re just trying to mess with me.

They say, “Kadi, the hell are you being a shaman for? There’s no profit in it?”

And then I look at them like they’ve been snorting kaja’mite. Yeah, the same stuff we turned into Kaja’Cola back in the day. Gives you great ideas, but the high only lasts for so long. Snorting that would probably give you a hell of a rush, though.

Now, look, I like gold as much as the next goblin. Makes the world go ’round and all that. I do my part! I go out into the world and gather up things to distribute to the Horde (for a price, of course; Momma didn’t raise no fool and I don’t do charity unless you twist my arm). Problem is that all the gold in the world isn’t going to be worth a damn thing if the world falls apart. You can’t take it with you, and, for that matter? Uh, hello? World falling to pieces here. We kinda need to hold it together.

So, yeah, I could lie and tell them that I’m just doing it to honor Thrall. I mean, that guy’s probably the best shaman I’ve ever seen not that I’ve seen many, and he did save our butts. Admittedly, he left that idiot Gallywix in charge, but not every decision the guy makes can be a great one.

The point is this: save the world today, turn a profit tomorrow. Only the way the world will hold is if we do it ourselves, you know.

I swear, sometimes I think I have to do everything around here.