To a roleplayer in any MMO, many people might find the character model they’re using a bit limiting. In SWTOR, we don’t really have this problem. We have the option of giving our characters cybernetics, various skin textures, tattoos, or even certain scarring. We can even adjust the weight of the character. We have the body type option in LotRO, also the option for minimal facial customization, but if we want our characters to have anything past that, we’re out of luck. The same goes for WoW in that we only have minimal customization options for our characters.

So what if the image of the character we have in our heads doesn’t match what our characters actually look like? What are we as roleplayers supposed to do then? And, for that matter, how are we supposed to let other roleplayers know we’re roleplaying at all? For some, walking through a major city is a good enough indicator, as is talking to various NPCs. For others, however, this might not be enough. This is where flagging yourself as a roleplayer can be incredibly handy.

In LotRO, this is very easy to do. By default, the names and various sundry things that display over our heads appears in yellow or greenish-yellow text. If we type /rp on into the chat panel, however, the text over our head changes to white, indicating that we’re roleplayers. You can type /rp into the chat panel to see if you’re flagged or not if you aren’t sure whether or not you’ve set it. 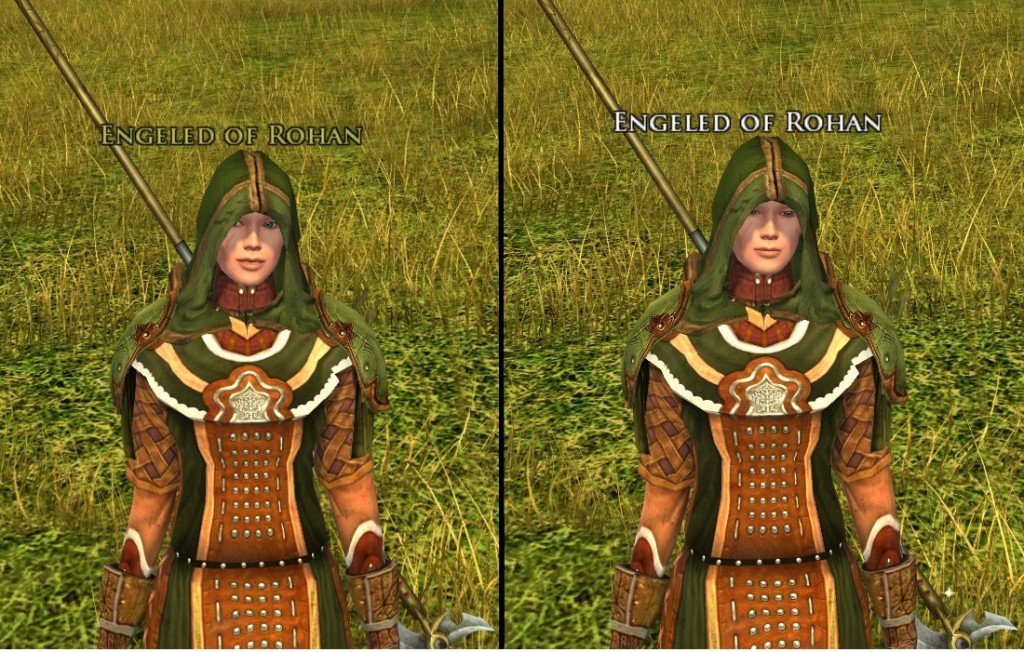 Engeled demonstrating how nameplates look with "/rp off" (left) and "/rp on" (right).

Turbine also decided to be wonderful and give us a biography screen. In this screen, you can show off your parentage/children (providing you’ve been adopted by another player or have adopted one, yourself), and you even have a spot to detail your character’s personal history. While many roleplayers in LotRO use it for it’s intended purpose, others still tend to take advantage of the space and write out a detailed description of their character’s physical appearance. I have yet to figure out how I want to take advantage of the space, so, for right now, it’s left blank on both of my characters.

Warcraft, Addons, and You

However, while Turbine was wonderful and built these tools directly into the game for us, Blizzard has not. If we as roleplayers in Azeroth want a similar tool, we have to utilize addons. At first, I didn’t know addons like this existed, but I downloaded one, it opened up a whole new aspect of roleplaying for me. I fell in love with them, and if you’re a roleplayer in WoW, having an addon like this is kind of a godsend, especially if you’re on a server where non-RPers coexist with the rest of the roleplaying community. If you don’t have one already, I highly recommend that you download one and play with it.

If this is your first time looking into one of these addons, I’d recommend starting off with either MyRoleplay or FlagRSP2/FlagRSP Cataclysm, if only because these tend to be the most commonly used roleplaying addons in the Warcraft community. There are other addons you could use, as well, but as I have no experience with them, I’m going to keep myself from talking about them. When it comes to choosing an addon for these purposes, however, I can’t really recommend using one over all the others out there as I’ve found that it’s really a matter of personal preference. Most of the flag generating addons are able to “talk” to each other, so you should be able to read all the flags you come across regardless of the addon you choose. Take your time, investigate the various RP addons, and choose whichever one you like the best.

After you’ve made your choice, install them as you would any other addon you use in WoW. Then, the next time you boot up the game and get ready to have fun in Azeroth, you’ll be ready to roll and you can start filling things in! However, you don’t have to fill out all those blank areas right away. Personally, I like to take some time to make sure my description for the character is solid before I fill in anything. Therefore, the first thing I tend to do is fill in the character’s surname if the character has one (or given name as the case may be) and set my flags, and I’d recommend you do this, too. After all, you can put in a description at any given time, but letting people know if you’re in character or not is one of the first steps to initiating random RP.

So you have your options on how to input your character’s physical description. The question now is how do you go about writing it?

You could do something as basic as “what you see is what you get”, implying that your character looks exactly as s/he is on the screen or you could go wild and crazy. Some even choose to put in their character’s backstory into their description, but I’d personally caution you against doing that. After all, your character doesn’t have their history written on their clothing (or do they?). Remember that no one would know your character’s entire life story just from looking at them. However, MyRoleplay does have a “Background” field that you can choose to put your character’s history into if you were so inclined. (I never do.) You can get away with this in the space Turbine provided for us, as well, but I would not recommend doing this outside of the designated areas unless you want to have other roleplayers look at your flag with some confusion.

Personally, my character descriptions tend to be a bit on the briefer side, a paragraph or two at most, and are limited to my character’s physical description only. Think about what others would see, smell, or hear when they come upon your character. If your character is one of the Forsaken, does his/her bones creak when they walk? Perhaps the character smells of the earth or like mold or your character wears various things in their hair that clack or jingle when they move. These are the things you’d definitely want to include, as descriptions like these are used to engage another RPer in your character prior to actually initiating conversation. In real life, a person’s opinion of you is set in their minds just from that first glance, so make it count! 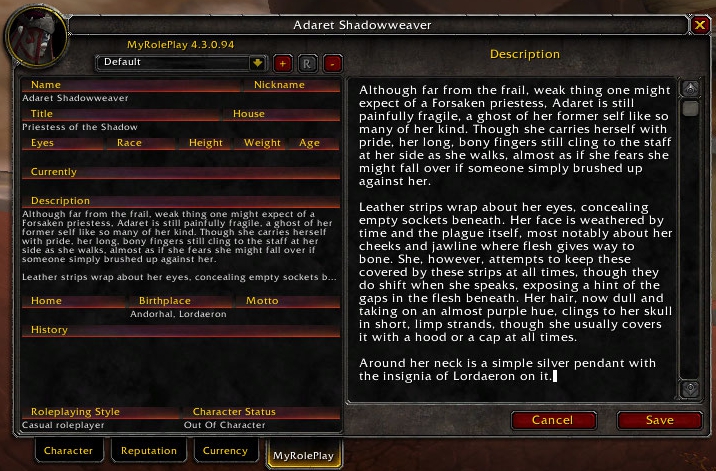 A look at the MyRoleplay interface (which blends nicely into WoW's existing interface) and Adaret's description.

Now, are there things to avoid? Certainly. I already suggested not putting your character’s history into their description, so I won’t touch on that again. However, there are other things. For example, you can see that Adaret’s description above has some extraneous descriptors that I could take out and lose absolutely nothing. This is a milder example of purple prose, or very extravagant and flowery writing, and isn’t exactly something a lot of people would want to try to slog through. Nor, for that matter, is thesaurus abuse. Examples of this would be writing “orbs” in place of eyes or something like “puce” in place of “green”. You don’t want to have to make someone break out a dictionary just to be able to understand what you’re trying to say. To see an example of this all put together, please take a look at this wonderful example crafted by one of my friends on Thorium Brotherhood of her character, Dariahn (please note that this is a parody and is no way reflective of Dariahn’s actual flag).

Another common thing I see people doing when it comes to their flags is saying how the other person reading your flag is supposed to feel when they look at your character. This is godmodding (which I will touch upon in another post) and is generally frowned upon. No one likes being told how their character is supposed to act or how they will react to certain things. Without going into a godmodding rant, however, I will simply leave you with this: Do not do it.

Keep in mind, however, that all of this is just a suggestion. I’m not saying that you absolutely need to have an addon to roleplay, that you have to flag yourself as a roleplayer, or that you need to write your description a certain way. However, these tools do make finding other roleplayers infinitely easier, and if you’re stuck for inspiration when it comes to writing your own description, you can hunt down other examples very easily just running around one of the major RP servers out there and seeing what other players have come up with. Ultimately, though, your character’s description is entirely up to you, so remember to have fun with it.