Today, it occurred to me that I don’t talk about LotRO as much as I probably should. It may seem like a strange realization to come to, but, after all, I hold just as much love for Tolkien’s Middle Earth as I do Azeroth or the galaxy at large. In fact, I probably hold more love in my heart for Middle Earth than I do any other fantasy world currently in existence simply because I grew up with the stories. I remember stumbling upon my uncle’s boxed set of the Lord of the Rings and the Hobbit and initially thinking they looked interesting. Because of my interest, my uncle would tell me what the books were about, and we’d write stories about what happened after the War of the Ring was ended up in his loft. Once I could actually read, I confiscated the books and read them in the early hours of the morning while I waited for everybody else to get up (he promptly bought me my own boxed set of the books, including the Hobbit, as a Christmas present). When the films came out, I naturally dragged my uncle along with me to go and see them, because, really, I couldn’t imagine anybody else going with me. He even bought me the extended edition DVD sets with their decorative boxes and little statues. To this day, I proudly display the Argonath bookends (though one of them sadly lost its hand) and the Minas Tirith box on my dresser.

Given all that, I’m sure you guys can imagine that when I discovered there was an MMO based on the books that held so many memories for me, I squeed like the dork I was, downloaded it, and played the hell out of it, though altoholism sunk it’s teeth into me very early on and I had a character list full of several characters that I’ve never really touched. They’ve since been deleted. I abandon the game every so often, but, in the end, I always come back to it, and I know that Middle Earth will always be there waiting for me.

It’s strange to think of how things would have been different if LotRO was the game that sunk its claws into me ages before Azeroth ever did. Pen and Shield might not even exist! I’d still be blogging, but the blog might have been titled something different, something hobbity (for I’m a hobbit at heart), and I’d be blogging under the name Anthyllis Greyburrow, the name of my main, a hobbit minstrel on the Landroval server. Speaking of, it occurs to me that I have yet to show off a picture of my girl, so… Meet Anthyllis! 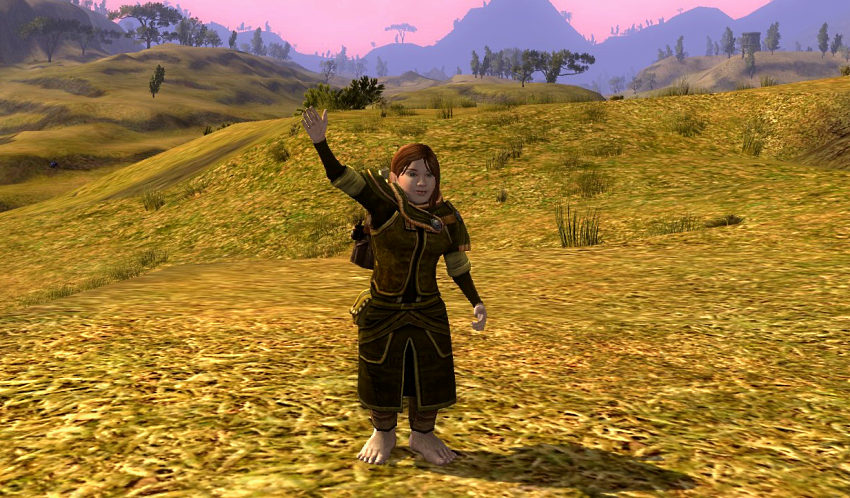 Anthyllis is, naturally, a hobbit of the Shire, who was fascinated by the stories of Bilbo’s adventures. Curious by nature, Anthyllis wanted to see everything Bilbo had seen, although the rest of the Greyburrows didn’t approve. She, however, was not to be deterred and set forth to Bree. Unfortunately, she didn’t exactly make it there. She got sidetracked by being attacked by brigands, seeing a Black Rider (scary stuff), and then getting sucked into the fate of Middle Earth while more hobbits were off bringing a ring to the elves and beyond. At that point, she was a bit too curious about the rest of the world to turn back. Besides which, all of this might make a good story to tell someday!

Unfortunately, LotRO is one of those “occasional” games for me, so poor Anthyllis only seems to get love from me every so often. It also doesn’t help that the game gets a bit lonely for me sometimes. Anthyllis is kinless and there isn’t random green text to keep me company as I go out and quest in the world. It’s hard finding a guild or group of people who are okay with you disappearing for several days at a time as you try to balance your free time between three different games and they won’t remove you due to inactivity. In spite of all that, though, I’ve been rather dedicated to LotRO over the past few days, putting in several hours worth of time to finally get Anthyllis to level 30 and hit the end of Book 2 of Volume One of the epic storyline. I’m very excited to keep going, though I’m getting little tired of fighting corrupted trees that decide to uproot themselves and attack me. I swear, they’re everywhere…